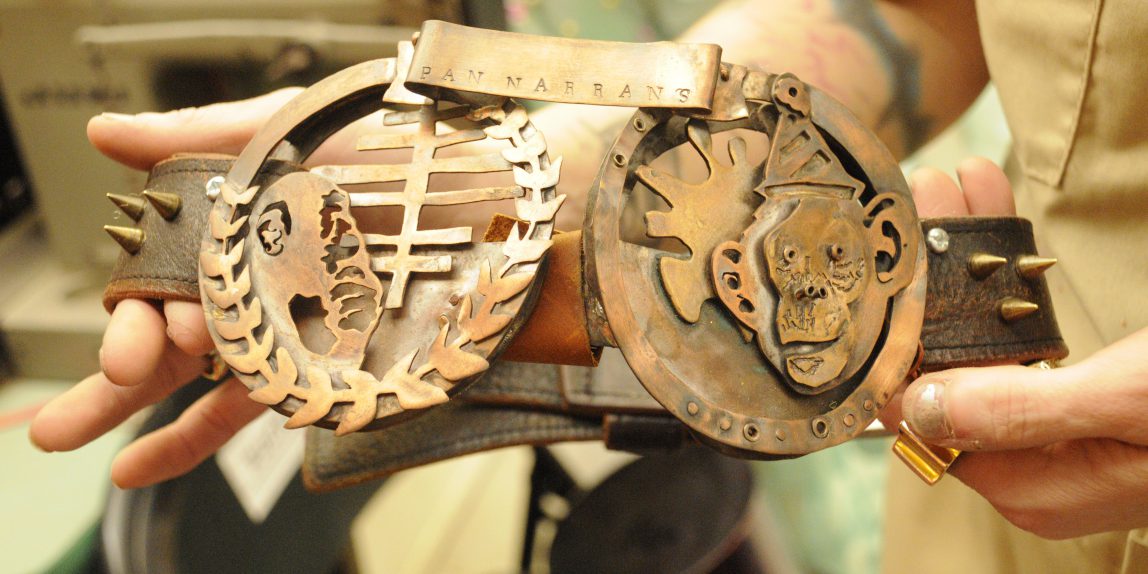 The energy in the crowd immediately shifted. People adjusted positions in their seats, focusing their phone camera screens to get the best Instagram shot as the first model strutted down the runway. The penultimate collection of the Spring 2018 Midwest Fashion Week show featured candy-coated colors, intricate headdresses and fantasmic three-dimensional garments. One model appeared as a bird atop a blooming flower; another as Mother Nature personified in ram form. Models twirled and posed playfully, and one even pulled along a pink rolling suitcase behind her as she exited. 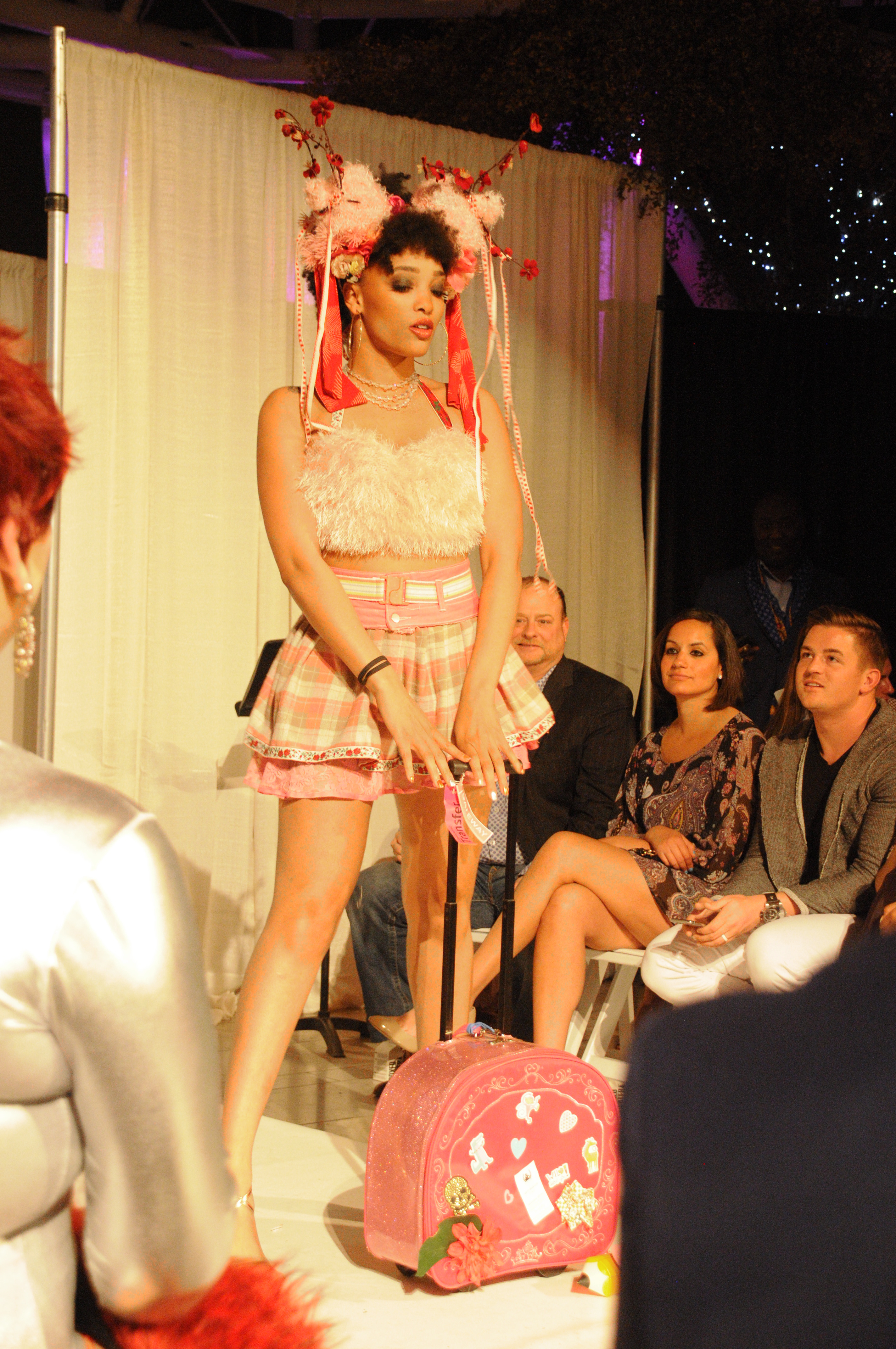 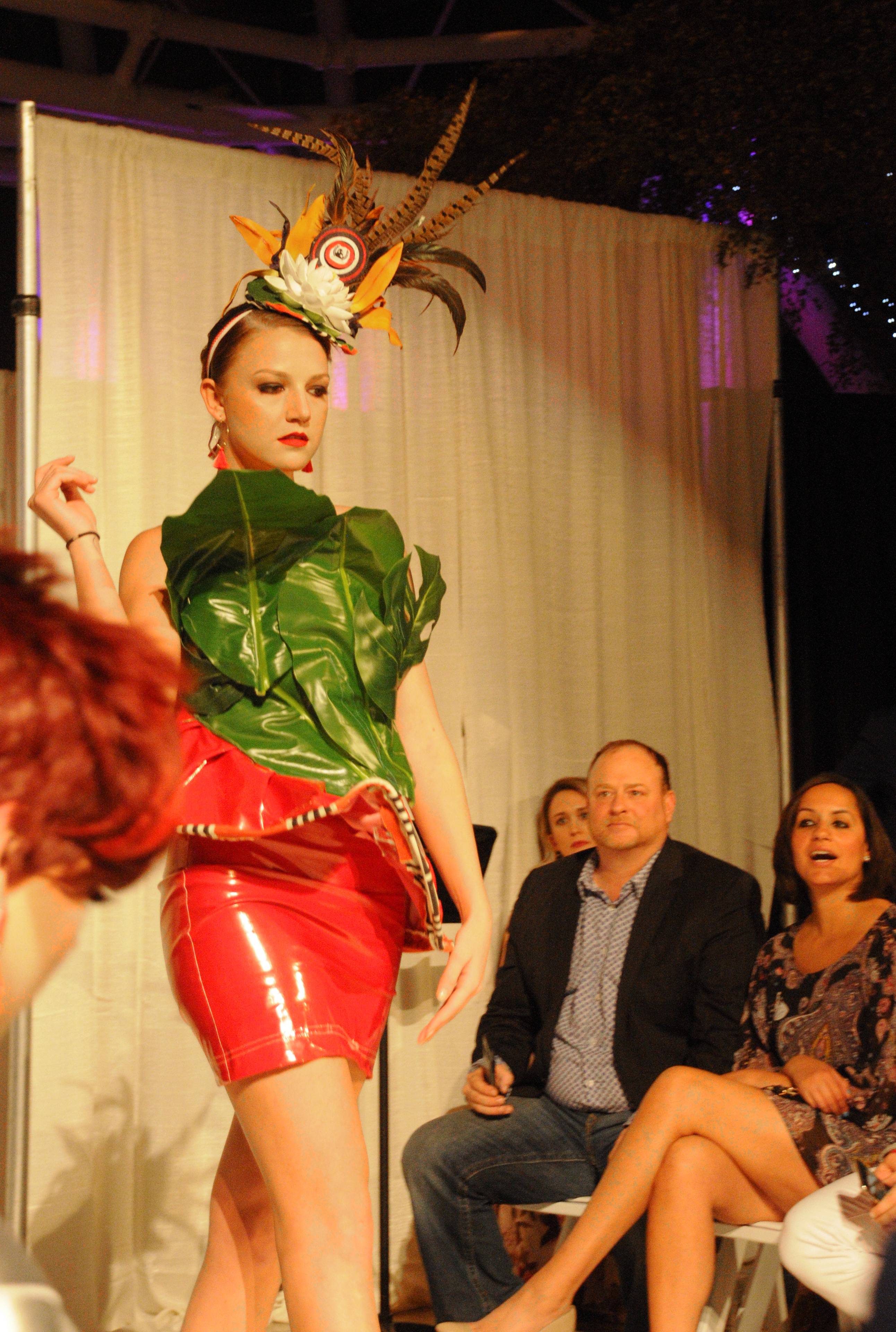 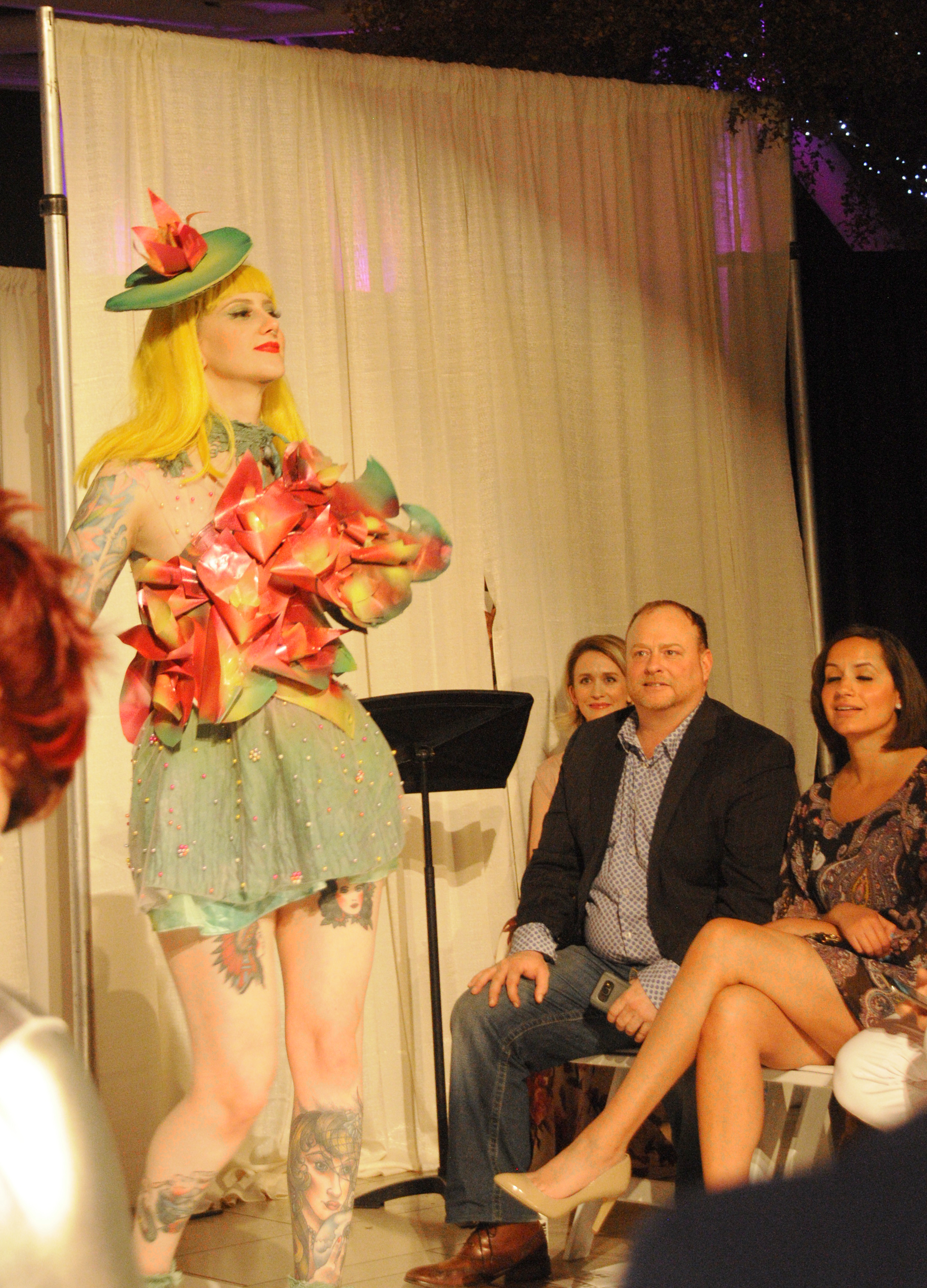 The imaginative and playful collection by Indianapolis designer Katy Newton resembles the whimsy of Betsy Johnson, and one aspect in particular sets her designs apart: They’re all created with repurposed and recycled materials. 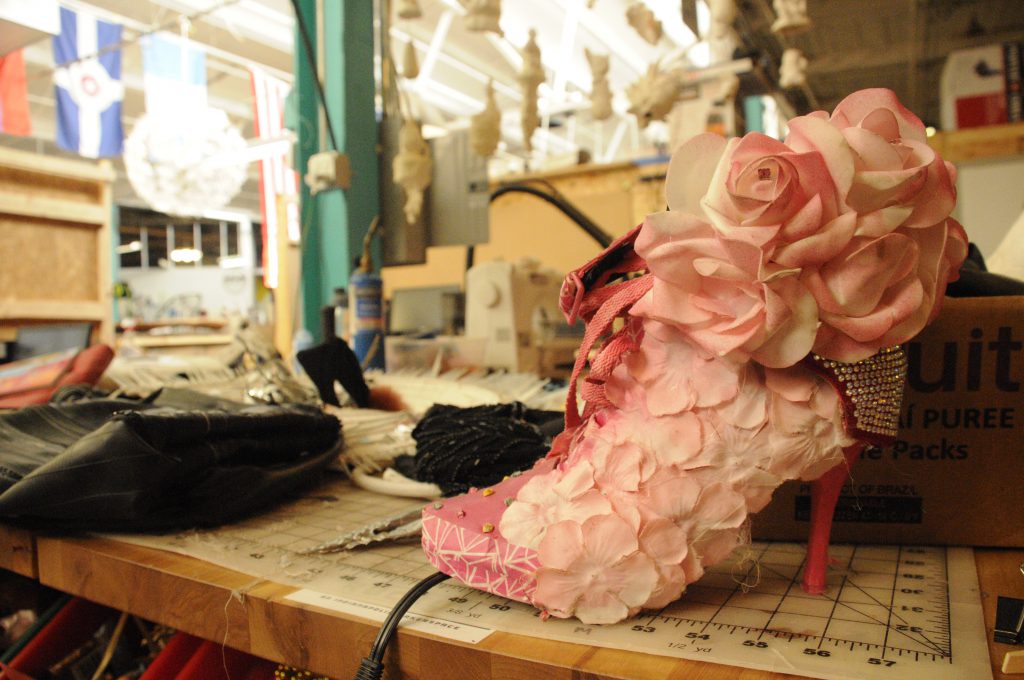 WHERE THE CREATIVITY HAPPENS

When I walk into Katy’s studio at Ruckus Makerspace, it’s like a colorbomb: Ensembles, organized by shade like a soft rainbow, line an entire wall. A tropical sundress with a cameo by Frida Kahlo hangs from a clothesline that connects one side of the studio to the other. Foam heads show off hats and headdresses that are made of feathers, skulls, beads, yoga mats and–in one case–an image from “I Dream of Jeannie.” 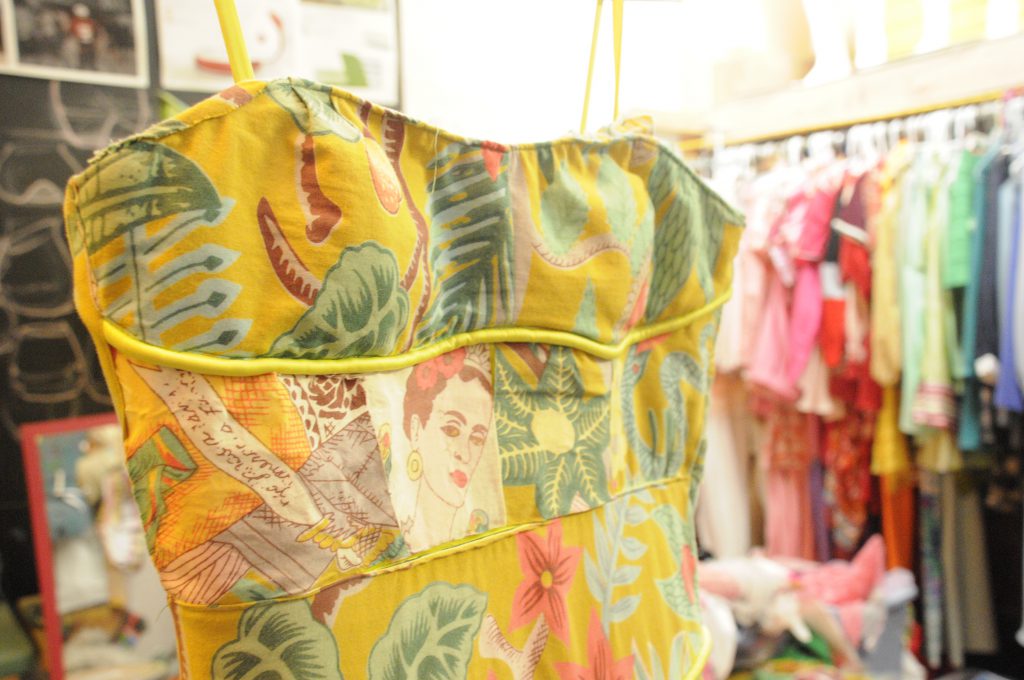 Katy’s studio is also full of friends, a group of male models who I recognize from her Midwest Fashion Week show. She explains that she supports Indy’s LGBT community by creating clothes for drag shows, as performers often can’t find the clothes they need in the right size. As we start our interview, her friends chime in, advocating for Katy’s fashions. And she compliments them right back, telling me she handpicked models for her MFW show because she wanted people with personality who would strut and sway and own the catwalk. You can’t help but get the sense that they’re all like a fashion-forward family.

And a biological member of Katy’s family is also there: her young son, also a creative soul, who’s sitting in the middle of her studio playing with paints, stirring them by hand to discover new color combinations.

Katy walks me through her studio, grabbing some of her creations and holding them up to her body or placing them on her head. The materials of each piece have a story, such as a fringe-accented apron dress with a matching military-style hat, which were made from a leftover “Shop Small Saturday” vinyl banner that was heading for the trash. 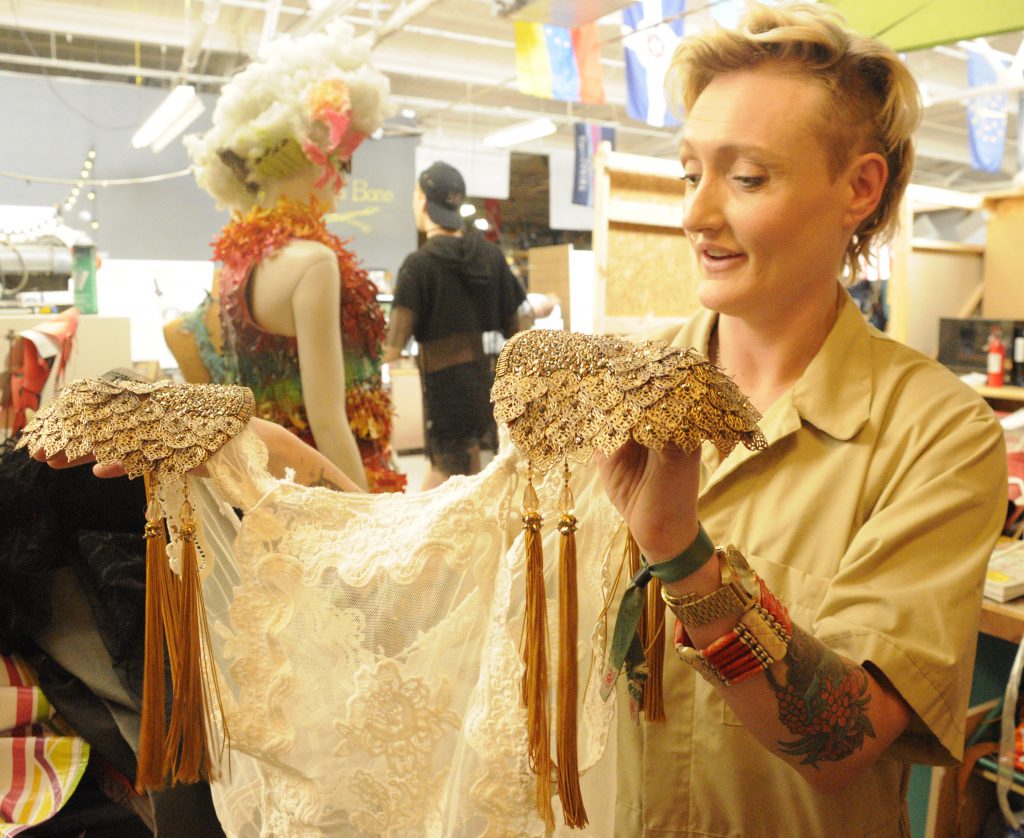 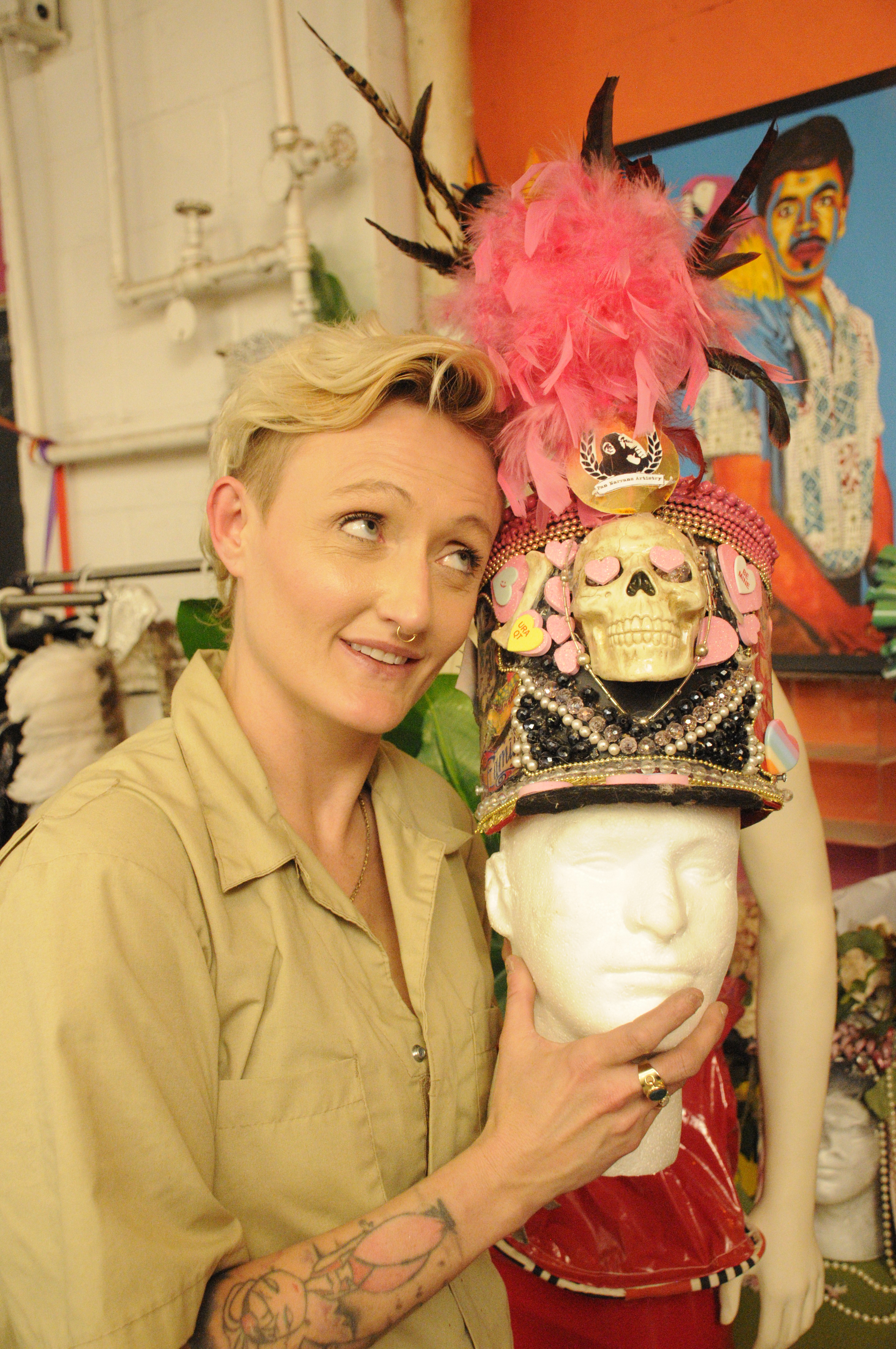 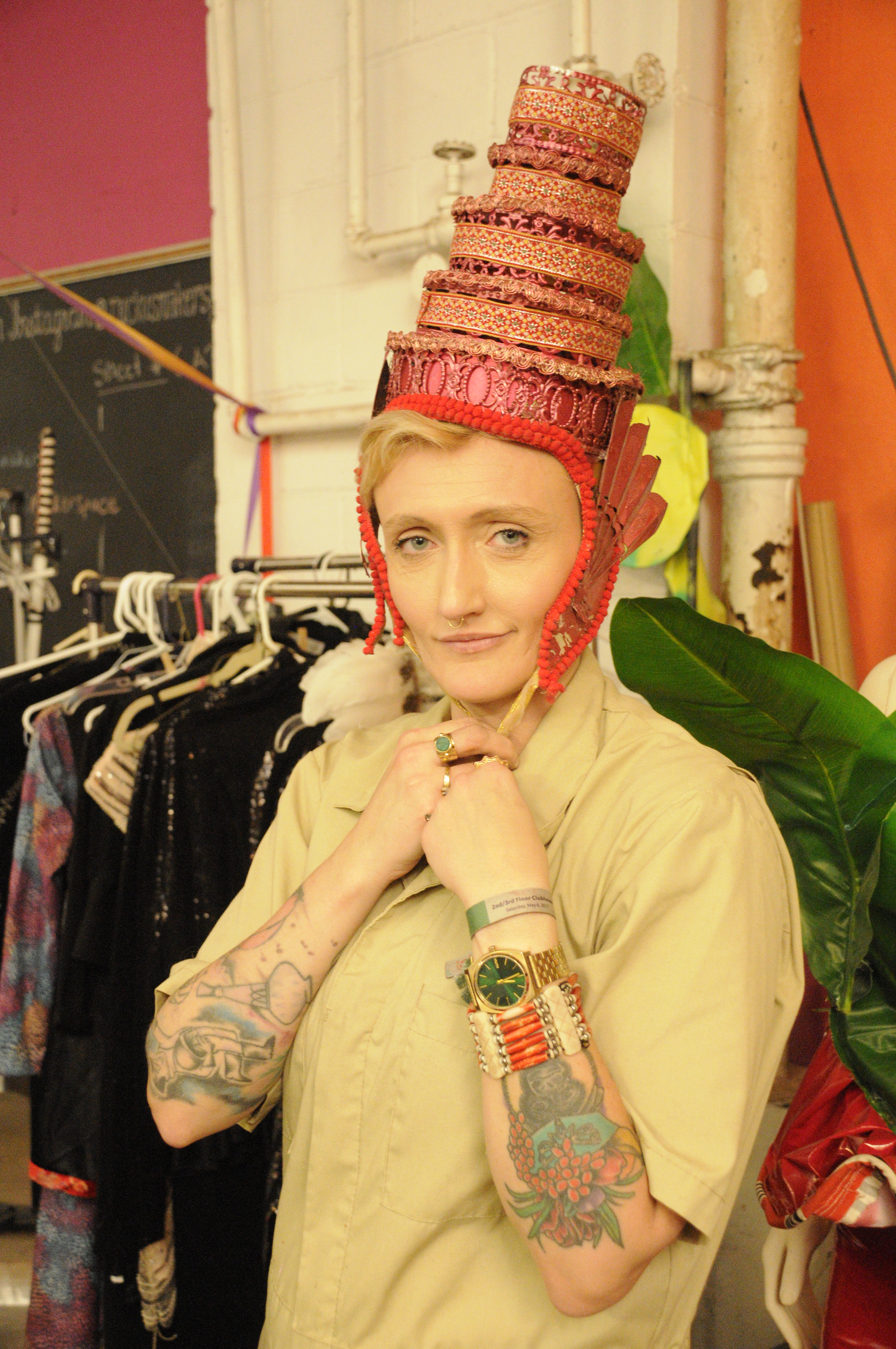 I ask her how she begins to plan for something as big as her Midwest Fashion Week show.

“A runway show is like a film. You score it, and each piece has a character, you’re writing commentary… My first show was cathartic because each was a phase of my life. I saw my young adulthood to my current-day life played out in that show.”

At this point, Katy’s reminiscing and crying, and her son drops everything and rushes past me to give her a hug. She and I both hurry to reassure him that his mom’s tears are in fact the good kind of tears.

And they are, because that show helped her get into the art therapy program at Herron School of Art and Design with a partial fee remission–and helped her move her creations out of her family’s living space (first the house, then the garage, then the barn) into this studio. 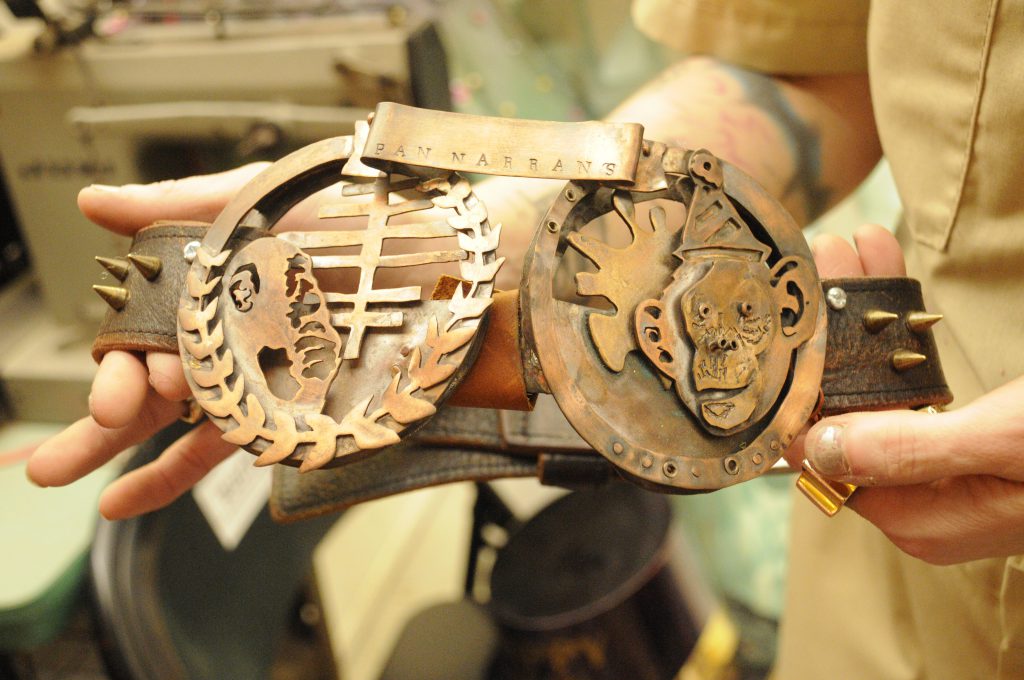 Evident in Katy’s designs: a reverence for chimps. It’s even in her design name: Pan Narrans, which means “storytelling chimp.”

“I identify with the chimp because they can be seen as reckless, unruly or a form of entertainment,” she tells me. “However, they’re clever, and their intelligence is often underestimated.”

Her earliest fashion influence: Joan Crawford paper dolls she played with when she was little. During our interview, she pulls out a few paper doll books, full of vintage-style inspiration. It’s Katy’s endless curiosity and love of design that helped the 6-year Air Force veteran and former Eli Lilly employee leave her job and start fresh only a year ago. Since then, she’s appeared in 5 fashion shows and hosted 15 events, most recently teaching kids at Butler University’s laboratory school how to use recycled materials to make cool stuff.

She wants to empower others to see art as something anyone can make from things they collect. She doesn’t sell her pieces; instead, she keeps them for future events, or repurposes them into yet another creation.

“You don’t need money to be fabulous. Wear it if it makes you feel good. You don’t need an external framework to define what your style is.” 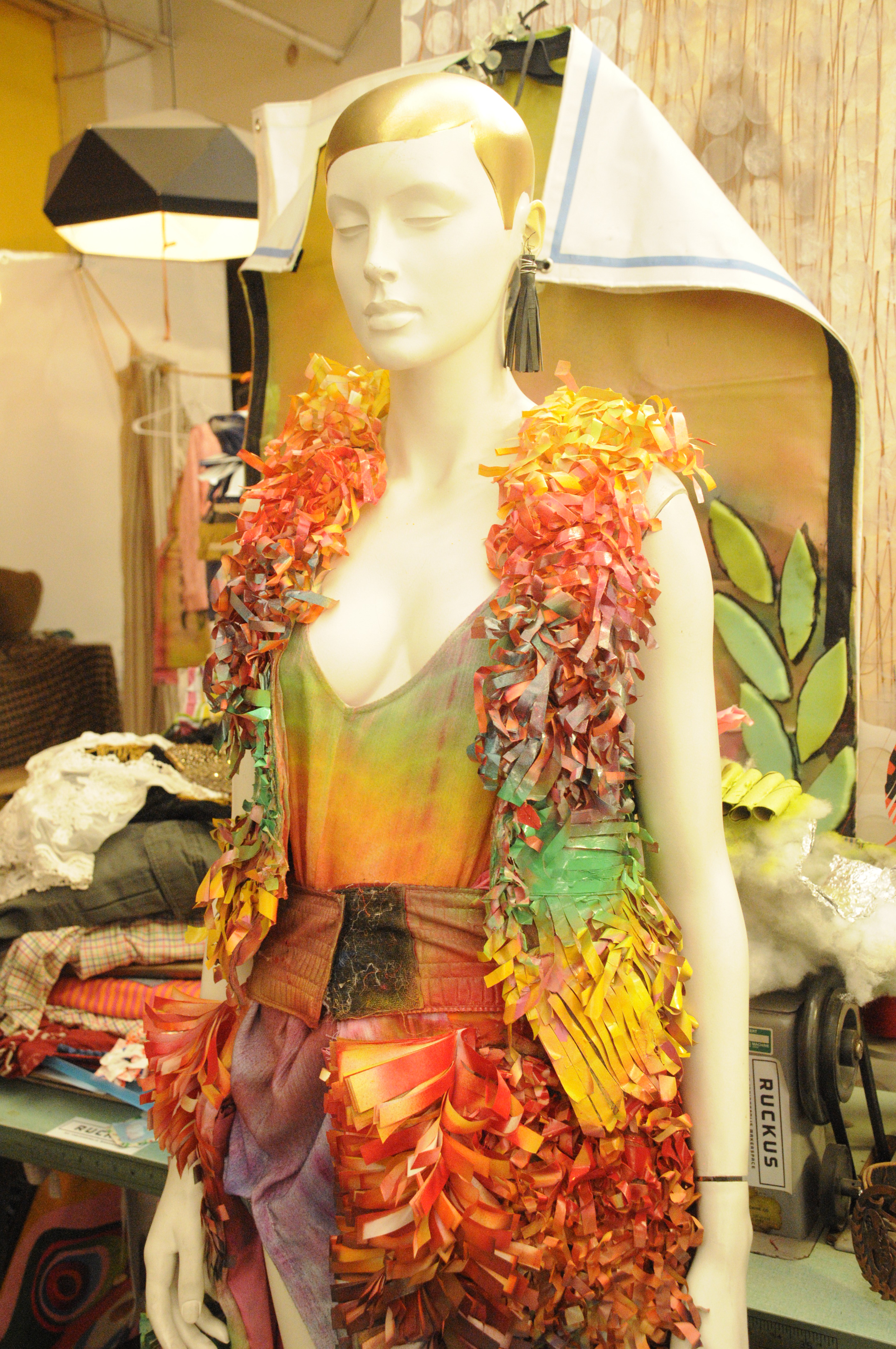 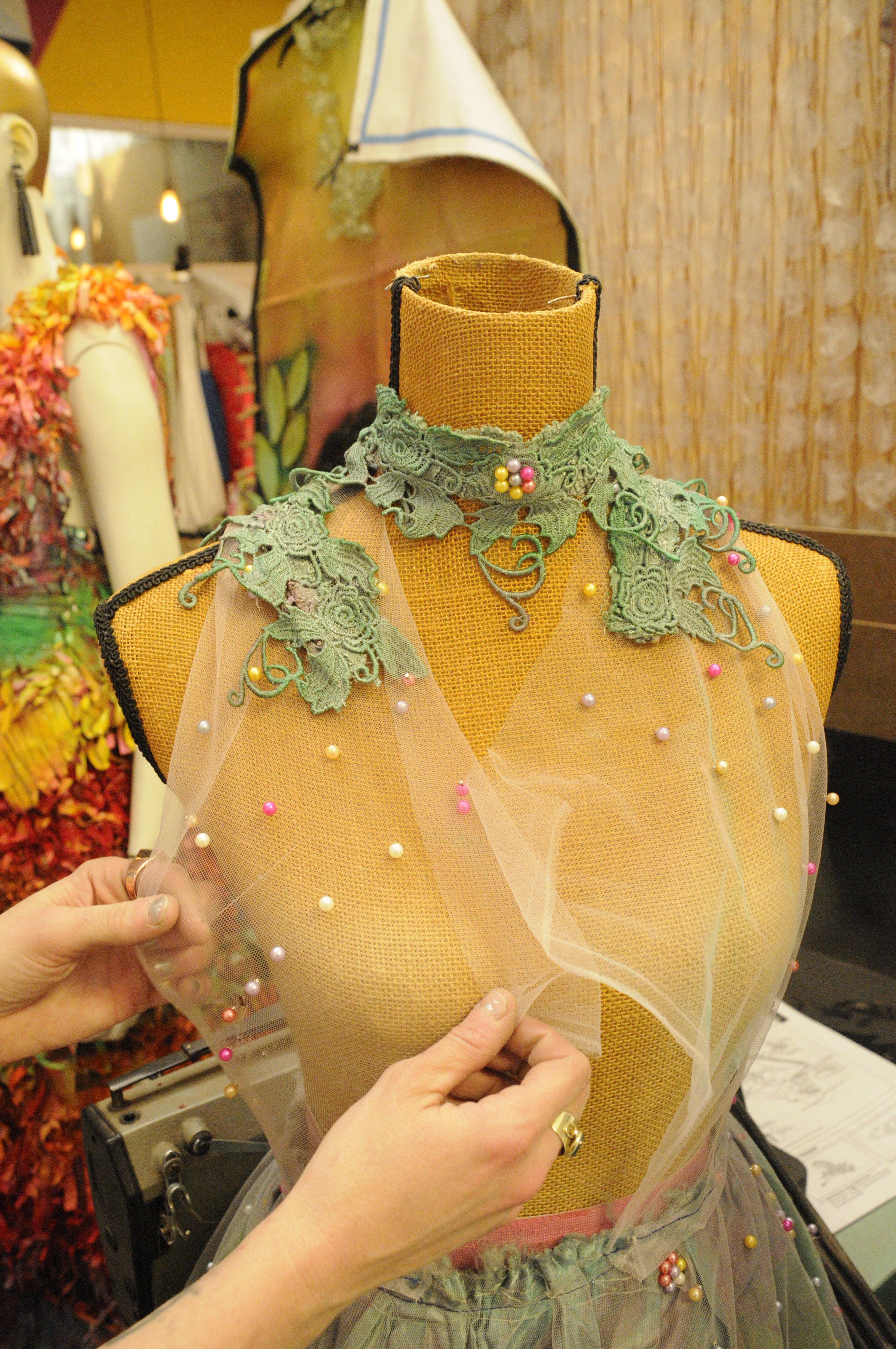 Learn more about Katy and her designs at Pannarrans Artistry.